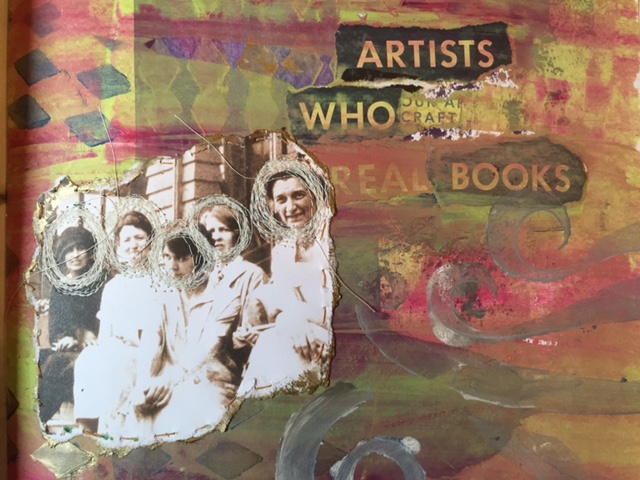 We grow up watching the people around us. We watch for cues about how to behave, how to shape our aliveness. Observation, mimicking, walking in the footsteps of our elders, this is how humans learn.

Being female was a liability for me growing up. I did not understand why, but I knew that I was the "seen and not-heard" variety of human, the one that waited for the men and boys to talk or act or ask first, the one who was looked at by some people as less than, or with an appetite that made me feel uncomfortable. I grew up watching interactions closely, noticing how this discomfort fit other women.

As a young girl in the early 1970s in Upper Michigan, I watched women stepping forward in new ways, wearing pants suits and practical shoes, taking leadership in local and national politics. But in my small town, in 1972, my newly single mother could not find an apartment to rent for herself and her four daughters. She was the sole supporter of our family, a public school teacher. No one would rent to a woman who had no man to back her up. We moved into the upstairs apartment of a small house, owned by a woman with disabilities and her two wild sons who lived downstairs. My sisters and I knew nothing of the difficulties our mother endured. Our father had virtually evaporated. That is a story for another time.

I watched my mother make a life for us. We were cramped in that tiny apartment; each pair of sisters shared a bedroom while our mother slept on the couch in the living room. We made our way together. I did not sense what I later learned to be the conditions in which my mother found her way. I just saw her do what was necessary.

Did you have Sadie Hawkins dances in your high school where the girls got to ask the boys to a dance? There was frenzy in my high school, who would you ask, and would they say yes? The guy I asked didn't even show up for the dance. I bounced around by myself in a flannel shirt and jeans. From that point on, I learned to dance with gir friends rather than waiting for boys to ask me to dance. Why wait for something that clearly was not going to happen?

I had multiple experiences of men being in charge of things.

Our church and schools were all run by men, with nice lady secretaries whom I addressed only when I had a problem, when I had to leave school to go to the dentist or home sick. I had a male math teacher who routinely commented on the pattern on my underpants when he called me to the chalkboard to do a math problem. I was confused, but not by the math. I was wearing pants. How could he see my underwear? I did not realize the fabric of my pants revealed the flowers or checks on my undies. This teacher watched me in the reflection of the wide lens of his eyeglasses while he worked at the board. I figured he was watching to see if I cheated on my papers.

I entered the world unprepared to navigate the sexualized waters of adult life.

I went to work at a theatre after college where the apprentice/intern company was a fresh buffet to be sampled by various men in the organization. Comments on our bodies, our hair, our behavior, jokes made in front of us or at our expense, or about other young women, things we were expected to simply live with, secrets we were expected to keep in order to retain our jobs as talented unpaid labor were just the way things were. We were employed by one of the premiere American theatres. I did not know who to complain to because everyone behaved like it was normal for these powerful, married men to flirt heavily with single young actors, pressing us to make out in their cars in the parking lot or backstage where all manner of things went on behind the curtains. These were not romances, they were secrets we kept because we thought being attractive and willing would move our careers forward. Most of us have lived beyond the tonnage of emotional wreckage, some more easily than others.

It took me a very long time to understand that sex was not a normal condition of employment, being sexy, looking good, and being attractive and complacent, obedient to the standard of behavior established by men in power. My femininity, to the degree that I was aware of it, was something I learned to parlay. But I also worked very closely with lesbian women by whom I felt seen for my capability and skill. Sexual attraction was not part of the equation. Capable and skilled was enough. It was a relief to be in settings where sex was not part of the dynamic. I had some good professional experiences at that theatre. I had enough of them to realize that there were places and people in the world who saw men and women's contributions to the creative process as equal. The entertainment business was not an easy place to become a balanced and mature professional.

Fast forward to where I am today, a writer and artist working in community with other people, mostly women, but often with men, where the consciousness about sexuality has ripened. We are more aware of when sex becomes the crux of a power dynamic. But no, we have not solved all the ways in which women's sexuality is seen as a limiting factor or as a community resource.

more celebrated in Eastern Europe, but honored here in the United States, which celebrates March as National Women's History Month.

Standing for all women is the move we have to make.

We have to stand for other women.

Yes, men are part of the equation of human life, they are part of our ecosystem, beloved, cherished, inspired, co-working towards a democracy where all beings are created equal. Humanity feels more and more like an experiment, doesn't it? But, the conditions in which we were raised, seen through the lens of time, are revealed as less than ideal. Yes, we got through. But I don't settle for getting through any longer. Neither do many other people on this planet.

I will not back down from standing for other women. Even women who do not yet understand that we swim through each other's ecosystem.

Think about where your time, attention, and dollars go every day.
Watch which voices narrate your days or sing to you first thing in the morning on your listening device. How many products handled or made by women do you purchase?

Being a woman, or person identifying as female, does not assure a devotion to social or environmental justice. It does not assure that a piece of art will express values that you aspire toward. I am not that naive. But as we see male dominated institutions crumbling from within, where confirmed domestic assault is suddenly recognized as a reason not to hire a man, I ask you to notice where you place your trust.

There is not just one way to live here. Our society has depth and breadth to accommodate many variations. But in order for real change to happen, for women to be economically and socially empowered to conduct lives where they are respected for who they are as individuals that contribute to the greater good of the world, we have to change the way we make choices.

Watch the women in your world and make choices that raise them up.

Sharon Salzburg says compassion grows where we put our attention. I lift these women up because I believe they have something of worth to offer, something that may benefit you in your life.

Lastly, I ask you this.

It starts with us. We model for our children by what we watch. Women are mostly, and by nature, generous. We require instructions to put our oxygen masks on first.